From Brothels to Royals: The Complicated Past of The French Bulldog

For a closeup of the Frenchie’s rather wanton roots, we’ll head to the famous Montmarre neighborhood of Paris, on any given night in the 1890s.  Smack in the middle of the Belle Époche, when economic prosperity led to a boom in technology and the arts, persistently medieval Paris was being transformed into the chic, modern city that it is today.
Ignoring the silent disapproval of the white-domed Basilica of the Sacré-Cœur rising on the hilltop above it, Montmarre was a bustling nightlife district. Its cheap rents attracted a cross selection of working-class Parisians, and its cabarets and cafes attracted countless artists, including museum-worthy names– Picasso, Renoir, Matisse, Degas, and on and on. 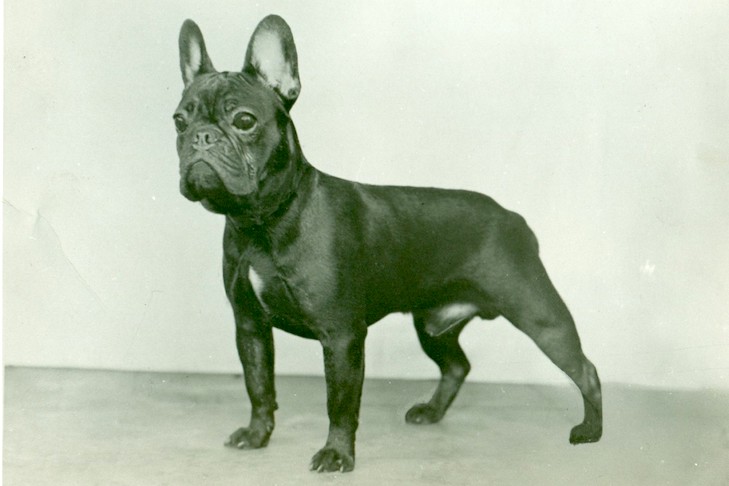 Amid its brasseries and bistros, Montmartre also had brothels – lots of them. Besides plunging necklines and silk stockings, the city’s belles de nuit often flaunted another accessory: a compact, snub-nosed little dog that sometimes had cartoonishly round, erect ears and an always outsized personality.

Other than companionship, these engagingly odd-looking dogs had a specific marketing purpose: They made very convenient icebreakers, and were instant conversation starters with even the most awkward of clients.

So indelible was this association between Paris’ fin de siècle working girls and their French Bulldog companions that the dogs began to appear alongside their scantily clad mistresses in risque postcards of the late-19th and early-20th centuries.
French Bulldogs of this period also turned up in more high-brow images, in particular the post-Impressionist paintings of Henri de Toulouse-Lautrec, the so-called “recorder of Montmartre.” His most famous canine subject was Bouboule, a Frenchie belonging Madame Palmyre, owner of the famous café La Souris (“the Mouse”). Poet Paul Leclerq described Palmyre as “a buxom woman with the ferocious appearance of a bulldog who, though in reality exceedingly kindhearted, always seemed to be on the point of biting.” Bouboule, for his part, was famous for urinating on the ankles of those patrons who had the temerity to try to pet him. 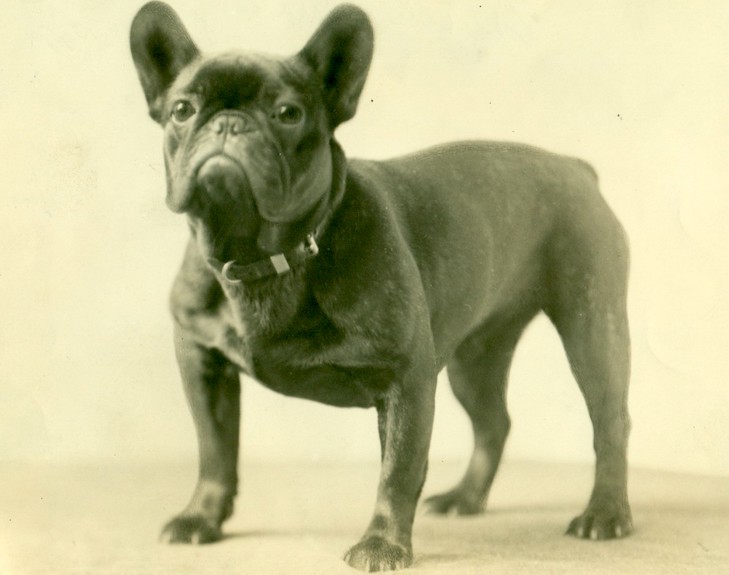 Like most fascinating characters, the French Bulldog has a complicated backstory. Our vignette in Montmartre is just the mid-point of his journey, one which spanned three countries, two continents, and virtually every social class before the breed was molded into the consummate companion we know today.
As its name suggests, the French Bulldog derives from Britain’s native Bulldog, which as far as relatives go was bigger and – during the early part of the 19th Century, at least – badder. Bulldogs had to be if they were to compete in bull-baiting, which involved grabbing an enraged bovine by the nose and hanging on for dear life.
When bull-baiting and other forms of animal combat were banned in England in the 1830s, Bulldogs headed to the show ring, where they were divided into classes by size, including ones for the smallest of these smush-faced charmers – the English Toy Bulldog.

Just as the Bulldog had experienced a seismic shift in identity with England’s growing humane movement, so too did the French Bulldog get nudged into existence as the result of massive social change.

As early as the 1810s, machines that could manufacturer textile goods a hundred times faster than the human hand threatened to undo the literal cottage industries of the English countryside. In Nottinghamshire, famous centuries before as the home of Robin Hood, a shadowy figure with a similarly rogue operating style emerged: Ned Ludd led a revolt of angry textile workers who pounded the newfangled machines with sledgehammers in the dead of night, and wrote letters of protest sent from “Ned Ludd’s office, Sherwood Forest.” Though ultimately unsuccessful at stopping the march of progress, Ludd is immortalized in the word Luddite, which has come to mean someone who objects to innovations in technology. 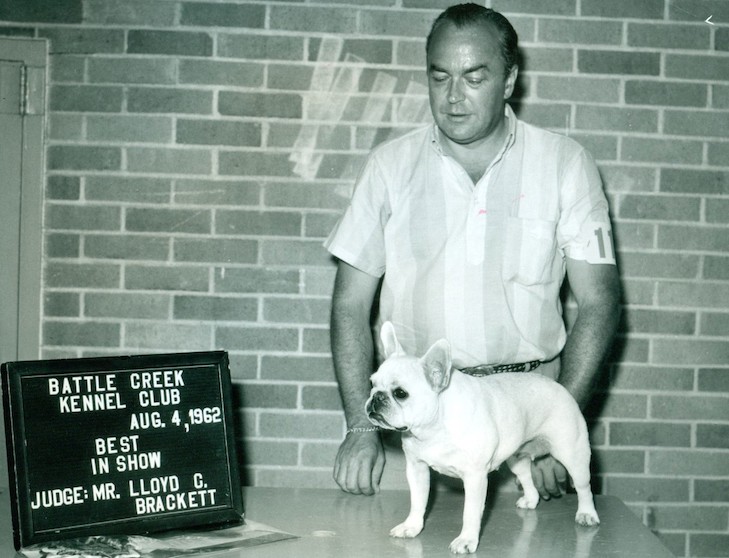 All Levels of Society

By the time the Toy Bulldog arrived on the scene, Ludd’s revolt had faded, and Nottingham’s highly-skilled, home-based artisans had been replaced by low-wage workers who worked long hours in often unsafe mills. It was these female lacemakers who took a fancy to the Toy Bulldogs, although no one quite knows why.
Perhaps these miniaturized bulldogs ate less food and took up less room in the tight quarters that were all the women could afford with their meager wages. Maybe they fit snugly on a lap, where they made an attractive detour for fleas that were otherwise human-bound.

Or maybe the weary workers just looked into that mischievous face and were utterly captivated, a phenomenon that survived quite unscathed to today.

What we do know is that the lace workers were so smitten by their funny little Bulldogs that when the Industrial Revolution eliminated their jobs completely, they took the dogs with them across the English Channel to the Normandy area in northern France. There, bespoke clothing was still valued, and the lacemakers’ skill with fabric and needle was still in demand. The little dogs – some of which had wonky, erect ears instead of the traditionally “rosed,” or crinkled, ones valued by Bulldog purists – soon became popular with various levels of society, including our aforementioned ladies of the evening. 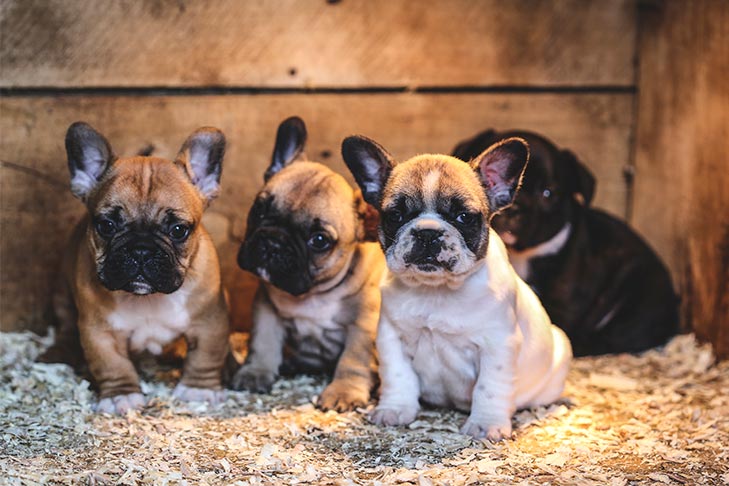 But the French Bulldog’s popularity didn’t stop there. Its courtesan connection made it chic among powerbrokers and even royals of the day. Grand Duchess Tatiana Romanov had a beloved Frenchie named Ortipo who it is believed met the same unfortunate fate as the rest of the Russian royal family. The spunky dog’s likeness, sculpted in quartz and bejeweled by Fabergé, now sits in a museum in St. Petersburg.
Eventually, American tourists became enamored of the breed, bringing it to the United States, the third and final leg of its journey. A French Bulldog is even recorded as going down with the Titanic: Her owner, banker Robert Williams Daniel, insured her for 150 British pounds, or about $17,000 in today’s U.S. dollars. Daniel survived the sinking; the dog, named Gamin de Pycombe, did not.
The Frenchies that did make to this side of the Atlantic invariably proved the breed’s charms knew no borders. American fanciers created the world’s first French Bulldog club and standardized the breed’s signature “bat” ears. Today, the French Bulldog is the country’s fourth most popular breed according to AKC registrations – not bad for a reformed guttersnipe who used to hang around on the wrong side of the tracks.
Produced in England, popularized in France and perfected in America, this adorable little bowling ball of a dog has charmed everyone from call girls to kings. And its rags-to-riches story is an apt embodiment of the American dream, in which reinvention – looking to where you want to go, not to where you have been – has always been the guiding philosophy. 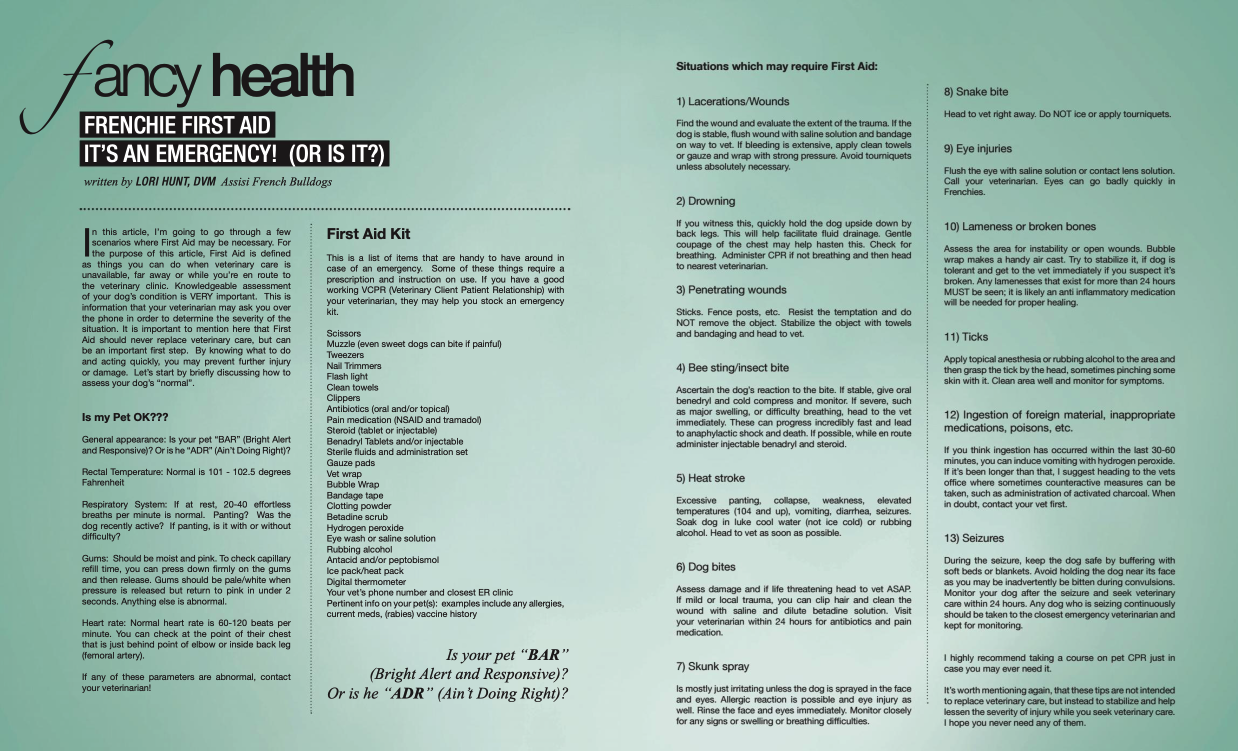